This week’s edition of Beyond the Cupola features Josh Collins, the assistant VP of Culture here at Oconee State Bank. Recently Josh was challenged to something he never thought he would do: jump out of a perfectly working airplane and freefall through the sky. The problem? Josh is terrified of heights and even more so of falling. This week Josh walks us through the fear he faced and the way he was able to use this opportunity to support ESP.

Fear is to be afraid of something as it is likely to be dangerous, painful, or threatening. This is why many times in life it is hard to face your fears and do something outside of your comfort zone. Many of us try to avoid situations that we perceive as dangerous, painful or threatening because we fear the unknown. I recently had the opportunity to face one of my greatest fears and even lived through it to share my story. I have a fear of heights that, while it may be irrational at times, is associated with the danger of falling. However, on Saturday, May 18th, you could find me at ESP’s Big Jump preparing myself to jump out of an airplane and I was less than excited about that prospect. Here is that story.

Last year, Neil Stevens was asked to jump as a celebrity jumper for ESP. He was unable to participate, but I went up to him to offer some encouragement. “Neil, you have to jump for ESP because it is a great cause,” I said. He asked, “Would you do it?” I proceeded to explain that I am afraid of heights and there is no way I would ever jump out of a perfectly good airplane. That is unless I was asked by someone from ESP to do so. I told him that I would have to face my fears because supporting ESP is worth a little bit of personal discomfort. However, at that time it did not seem like something that I would ever have to worry about. 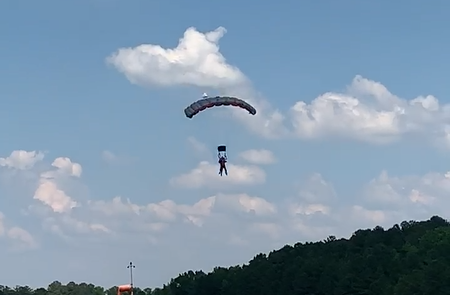 During March of this year, Oconee State Bank held the first session of our speaker series. We were thrilled to have Dr. Randy Ross join us to speak to members of our community on relationship development. At that first session, several members of ESP joined us. Then, Laura Whitaker and Matthew Dooley appeared with balloons and asked Courtney Bernardi to join them for Big Jump. That seemed to be my signal to head to my office for a while. I waited in my office until I thought everyone had exited and went back to our community room to clean up. On my way, I was just in time to be greeted by a smiling Matthew. He asked if I had ever jumped out of an airplane and my stomach tensed up. “No Matthew, I haven’t ever jumped out of an airplane,” I replied. “Would you jump out of an airplane for ESP?” he asked. I thought about it for a moment and had to decide if I would honor the words I spoke to Neil. After just listening to Dr. Randy Ross speak about relationships being built on trust and honesty, would I be a person of my word or someone who gives in to their fear? My response was, “Matthew that is the magic question. I guess I am going to jump out of an airplane.”
As the day drew near, I got more and more nervous some nights even struggling to sleep as I thought about my choice to jump. I contemplated different ways that I could try to avoid having to jump and was even given a gift when the first date was canceled due to weather. Surely I can come up with a “reason”, which could easily be read as an excuse, to help avoid going. However, the day for Big Jump came and I had some loving family members willing to strap me into a car to help me get there without “getting lost”.

We arrived and as I got suited up and given instructions on what to expect, everything seemed to go by in a blur. The next thing I knew, I was sitting in a plane traveling down a runway and the quickest way back involved a parachute. The lights turned red, then green, and everyone else started exiting stage right. My tandem partner helped motivate me toward the door and I looked out of an airplane in motion with nothing between me and the sky. Exiting an airplane while it is in motion has never seemed like a good idea to me unless there was a malfunction with said airplane and your odds of survival already look grim. At that moment, I can say I only felt pure fear. As we tumbled out of the airplane, all of the instructions I had been given disappeared just as quickly as the plane did behind us. I closed my eyes held onto my harness for dear life (not literally, you are strapped in extremely tight) during what felt like an eternity until the parachute opened. An eternity, I later learned, was less than one minute based on the video footage confirmation.

Then I looked down and the learned that we still had a long way to go. I got another moment to contemplate my life decisions and came to understand that at this point I would rather be moving slowly as opposed to the alternative. We continued to descend slowly and there were even a few moments where I could catch my breath and find beauty in the descent. I proceeded to receive further instructions on how not to break my ankles as we landed and luckily I did not forget those words of wisdom. As we slid in for the landing I had my first feelings of relief and joy which were joined by flower pods shooting off like fireworks. Then I smiled. I had faced my fear of heights and accomplished something I never believed I would do.

“Courage is not the absence of fear, but rather the assessment that something else is more important than fear.” – Franklin D. Roosevelt