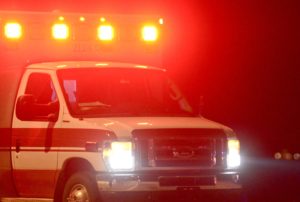 I was 22 years old working as a paramedic at the Mid-Georgia Ambulance Service in Macon, GA.  My wife and I were newlyweds, earning a living during the day and finishing our senior year of college at the same time.

For some folks, hearing that I — a buttoned-up middle-aged banker— began my career as an emergency responder may come as a surprise.

The truth is I grew up around lights and sirens. My dad spent his entire career as a firefighter, working his way up to Captain by the time he retired. I have fond childhood memories of hanging out at the fire station during the summers.

Many times, at 3 am, the alarm would sound because someone needed my dad’s help; therefore, sleep had to wait.  It was “go time” and, for an 11 year old, it was a thrilling experience!

During college, I went to paramedic school and became a full-time EMT while I was also a full-time business student. During those years, I learned a great deal about what it meant to sacrifice for the sake of others and to respond to someone’s needs at a moment’s notice.

You see, my partner Tom and I were responding to an emergency call that afternoon. It was a routine call, but the streets were flooded. Rain had been pummeling Macon for several weeks, causing the roads to be extremely slippery. I began to wonder if we should have taken a canoe instead.

We rounded a sharp corner and unexpectedly hydroplaned, smashing into a fire hydrant. We flipped three times causing the ambulance to burst into flames and land drivers’ side down in, ironically, a cemetery. It was like a NASCAR crash and I still cannot help but think of that old Kenny Chesney line, “Now I know how Richard Petty feels.”

Tom and I were in shock. My seatbelt was jammed, and because we were sitting sideways, neither of us were able to get out. We tried our best to escape but to no avail. The fire was quickly beginning to engulf the ambulance.  We needed help and needed it fast!

That’s when Norris showed up.

Norris was not paid to be a first responder. In fact, he was a “trouble-shooter” for the Georgia Power Company. He was driving to work and saw the entire incident unfold before his eyes.  He parked his truck and ran to the burning ambulance. He pried back the windshield with his bare hands and pulled Tom and I to safety just before the ambulance became fully engulfed in flames.

After Norris saw that we were ok, he left. Tom and I could not believe that he left without giving anyone his name and without an explanation.

It took days to track Norris down. His humility was remarkable. Here was man who had literally just saved our lives while risking his own, who saw no need to take the credit or attract attention to himself.

Were it not for Norris, I would not be writing this today. It’s hard to think that neither one of my sons would be alive either. Yet, because of Norris, they are here. Other than a damaged ambulance and a melted blockbuster VHS movie (the good ‘ole 1980’s baby!), everything was fine.

Though he did not seek it, Norris’ name and heroism began to spread throughout the city. He was a true community hero who had rescued the “rescuers.” He had saved the very people whose job was to save others.  He received a proclamation from the Governor of Georgia and many accolades from the Georgia Power Company.

The citizens of Macon began to recognize his sacrifice and heroism.  In many ways, he brought our community closer together.  He not only saved Tom and I, he did a great thing in serving the broader community.

At Oconee State Bank, we also believe in the power and importance of community.  Community is essential to life, it creates a sense of belonging that we all desire and need.

Our first responders, including our firefighters, police officers, and paramedics, play an essential role in safeguarding our great community of Watkinsville and the greater Athens area.

However, I am convinced that it does not stop there, it also includes all of us. People just like Norris.  It also includes our businesses, non-profit organizations, chambers, churches, and all citizens young and old.

We all play a role in responding to and meeting the needs of our community.

It does not have to only entail going into a burning skyscraper to give your life for the sake of others.  It does not have to be running to a burning ambulance to pull two paramedics to safety.  It can be something as simple as listening to someone else’s story.  It can be understanding someone else’s hurts, needs, wants and taking action to make their lives better in some small way.  We all have the opportunity to mark the lives of others everyday.

The chance to mark the lives of others presents itself to us every day.  So, we must ask two simple questions:  Will we recognize the opportunities to mark lives today?  And, when we do, will we act?

Have a remarkable day!

3 thoughts on “The Remarkable Heroism that Shaped, CEO, Neil Stevens’ Outlook on Life”